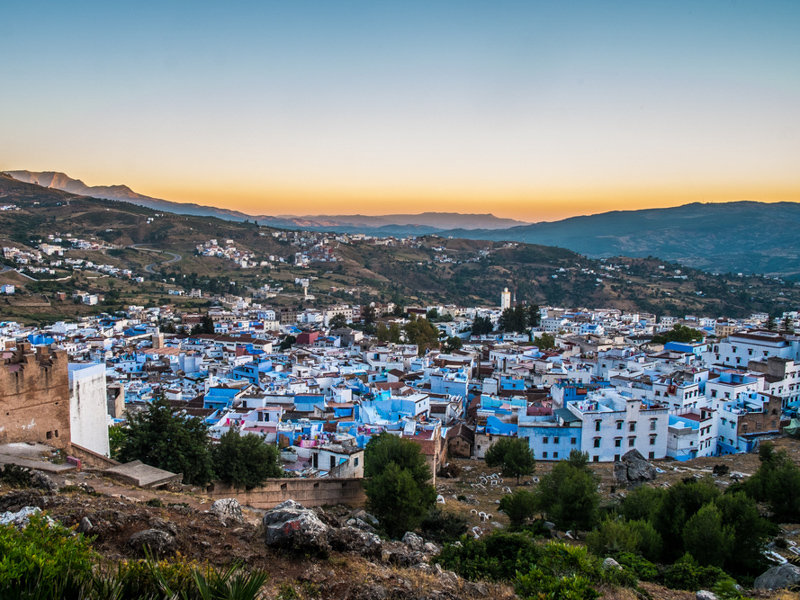 Due to its central location and excellent travel connections, Marrakech exists as the perfect base from which to explore Morocco. After staying at one of our many traditional riads in the heart of the Marrakech medina, why not take our Hip Highlights Tour to explore the rest of this wonderful country.

Our unique Hip Cultural Tour offers adventurous travellers the opportunity to discover Morocco beyond Marrakech. This is an excellent opportunity to witness the country’s diverse landscape, colourful culture and vibrant history, from the majestic Atlas Mountains to the Oasis towns, from the great imperial cities to world famous mosques. This tour has been curated so that it will give you an all-encompassing insight into the country’s identity.

Travelling from the frenetic energy of Marrakech, you will explore the Hassan II Mosque of Casablanca; the imperial city of Rabat; the ancient wonder of Meknes; the Roman Ruins of Volubilis; the cultural delights of Fez; the photogenic Chefchaouen; the natural wonder of the Cascades Ouzoud and more.

Depart from Marrakech, visiting the Hassan II Mosque before continuing on to Rabat for your overnight stay.
Bright and early at 9.00am, our driver will meet you at a dedicated pick up point close to your accommodation in the heart of Marrakech. The Hip Cultural Tour begins with a pleasant journey to Casablanca to visit the majestic Hassan II Mosque, the largest mosque in Morocco and North Africa. Unlike the majority of Mosques, which are closed off to people who are not of the Islamic faith, the Hassan II Mosque differs in that it allows visitors of all faiths to come in and view the inside of the building; and how thankful and lucky we are! As designed by French Architect Michel Pinseau for Hassan II, the king of Morocco between 1961-1999, the Hassan II Mosque stands on a prominent piece of land, majestically rising out of the Atlantic sea. Inspired by a verse in the Qu’ran which states god’s throne should be built on water, sections of the mosque’s floor has a glass floor so worshippers can kneel over the water. The hour-long tour of the Hassan II Mosque not only offers the opportunity to see one of the great architectural structures of Modern Islam, but it is also an opportunity to learn more about the religion which is so significant to Moroccan culture and society.

Depart from Rabat, visiting Meknes, Moulay Idriss, Volubliss, before continuing on to Fez for your overnight stay.

As there is so much to see and do, Fez definitely deserves an extra day of exploration. We strongly encourage you loose yourself in the medieval labyrinth of small, winding streets in the traditional Medina, Fez el Bali. For a more structured approach to exploring the city, we also recommend the Chouara Tanneries, for a chance to see the traditional artisan trade first hand; Medersa Bou Inania, an ancient theological school from the 14th cent.; and Borj Nord and Merejid Tombs, which both lie on the surrounding hills offering 360 views of the city.

As you continue to ascend further up the Riff Mountains, you will notice how fertile and green the landscape is in comparison to the dusty, red Atlas range. This brings a welcome stillness to your surroundings, allowing for respite from the Moroccan sun. Hidden amongst the lush greens of the Rif range is the dazzling blue of Chefchauen. This blue-rinsed mountain village regularly makes it into the ‘things to see before you die’ and ‘top places to visit in the world’ lists, and it is easy to see why. To simply say, almost every building, every wall, and a lot of the floors are painted in a bright and brilliant ultramarine blue does not do Chefchauen justice. The town is very much a “you must see it to believe it” location, just look at the photos we have included to the right for a taste of what to expect. Aside from loosing yourself among the photogenic buildings , we highly recommend you visit both the Plaza Uta el-Hammam with its unmistakable Kasbah and a leafy square designed by artist Joan Miró in the new city of Ave Hassan II.

Travel from Fez to either Benni Mellal or Bin El Oudane for your overnight stay.

From day five you will begin your journey back to Marrakech, but that is not to say that these last two days will pass uneventfully. Your route from Fez to the Atlas Mountains, your entrance to Marrakech, is an ancient trade route once used to transport gold, salt and slaves across North Africa. Traces of this industrious and prosperous past are easy to find in many small towns along the route, each with a vibrant and unique history.

Two such examples are Bin El Oudane and Benni Mellal, which sit almost exactly between Fez and Marrakech. As traditional textile towns, famous across the region for their traditional hand-woven Berber rugs, both Bin El Oudane and Benni Mellal offer peaceful and tranquil surroundings and a chance to glimpse the authentic rural Berber lifestyle. This textile industry still forms the backbone of each community, however, today, it is supplemented by a significant man-made dam at Bin El Oudane, and a thriving vineyard and wine industry at Benni Mellal,

Your standard overnight stay will be at Benni Mellal. However, to make your trip extra special, why not upgrade to the hotel and luxury spa Bin El Oudane for only £100 per person? This Hotel and Luxury Spa offers a access to a Jacuzzi, hamman, sauna and fitness room; a variety of treatments, according to your requirements including thai, balinais relaxation, foot massages; and a range of water-sports, including water-skiing, wake-board and fishing.

Travel from Benni Mellal or Bin El Oudane back to Marrakech, via Cascades Ouzoud.

On your final day, it is time to head back the Marrakech via the majestic Atlas Mountains. The Berbers call the Atlas range idraren draren – “The Mountains of Mountains” – and it is easy to see why. The omnipotent Atlas Mountains stand tall as an unmoving monument, dominating the skyline, stretching as far as the eye can see.

As the road starts to curve and climb up the Atlas range, the scenery begins to change offering stunning panoramic views of lush valleys and arid gorges, peppered with small earthen Berber villages and dazzling minarets. Here we offer guests the opportunity to visit the majestic Ouzoud waterfalls, the highest in North Africa. (Here at Hip, we also offer a day trip to the Ouzoud waterfall, more information can be found here.)

The Ouzoud waterfall is also the home of the famous Barbary apes, the naturally tail-less monkeys that you find performing in the main Jemaa el-Fna square in Marrakech. It is delightful to see them roaming free in their native habitat. There are also several lunchtime restaurants (not included) all of which have spectacular views. 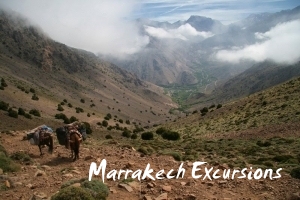